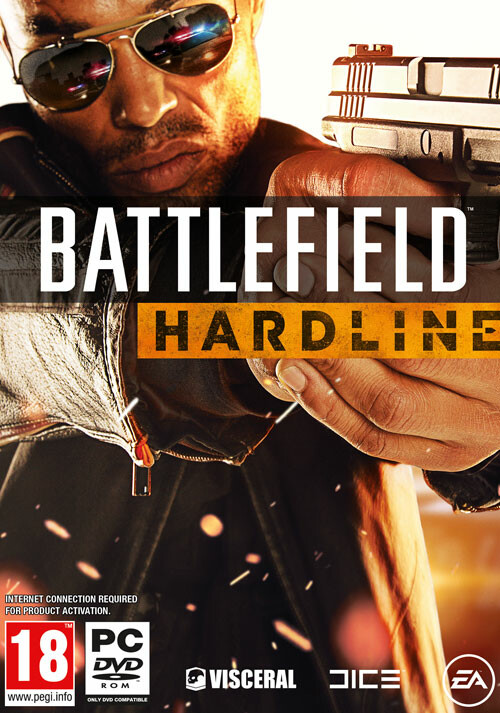 Add Battlefield Hardline to your wishlist

A security truck loaded with cash lays abandoned in a parking garage, and you only have seconds to cram as much cash as possible into your backpack before the cops arrive. Stray notes flutter behind you as you make a mad dash for the elevators. When you get to the roof a teammate jumps on the zip-line, but you choose a more direct route and swan-dive over the edge of the building. Your chute deploys. Bullets are whizzing far too close for comfort. The moment you hit the pavement it’s a straight-out sprint to the getaway van. Sirens are blaring. Cops are on the way. And that’s when you notice the massive crane crashing down. This is just a day in the life of the Battlefield Hardline player.

Dramatic cops vs. criminals campaign
Crafted by the storytellers at Visceral, developers of the exceptional Dead Space trilogy, Hardline’s single-player story puts you in the shoes of detective Nick Mendoza in an episodic crime drama. Lead your crew and employ new tactics to gather intel, obtain warrants, and make non-lethal arrests.

The fastest Battlefield ever!
The change from military conflicts to criminal encounters makes for a new, fast-paced take on Battlefield that has you playing on both sides of the law. Pull off the perfect heist and zip-line between buildings to get away with the loot, or chase criminals in intense pursuits at break-neck speeds and take them down – either way, the action will keep you on your toes. Even so, this is a true Battlefield experience. With fully destructible environments, modern-day weaponry, high-performance vehicles, and epic encounters, you’ll feel right at home!

New modes, new gadgets, new strategies
While classic Battlefield modes like Conquest remain intact, Battlefield Hardline features four all-new modes. Steal cash from armored trucks and make an escape in Heist; fight for control of a crate of loot in Blood Money; chase down criminals at high speeds in Hotwire; and save hostages in Rescue. Plus, new gadgets like the grappling hook and zip-line will change the way you think about every situation.

» How to activate an Origin (Direct) game
Read more: Opencritic.com

"Battlefield's first foray into stealth makes for a fresh campaign, and the multiplayer has something for everyone."

"A hard campaign (if you play on the hardest mode) and breakneck multiplayer are a good time, if often infuriating."

Based on 31 critics
ESRB Rating: M
Blood and Gore, Intense Violence, Strong Language, Use of Drugs