Add Black Skylands to your wishlist 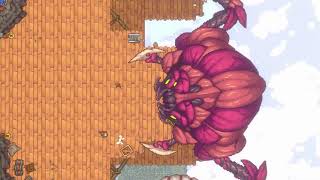 Buy Black Skylands as a Steam key at Gamesplanet.com

Prepare to set sail...through the skies! Black Skylands is the first video game in the skypunk genre that combines elements of Open World, Sandbox, Top-Down Shooter and Action/Adventure.

STORY
Many years ago, Earth turned into thousands of islands floating in the air. In the new world, peoples of Aspya used to live in peace...until vicious raiders invaded their island homelands.

You are Eva, a proud daughter of the Earners. The Kain's Falcons—cold-blooded bandits from the Desert Lands—destroyed the Earners’ Fathership and took your father’s life. Driven by revenge, you have to rebuild your aerial home “from the deck up”, arm and prepare for battle.

However, the Kain’s Falcons are not the only threat you are about to face. Deep in the depths of the Black Skylands, the mysterious Swarm lurks…

OUR TEAM
Black Skylands is a big project by a small studio called Hungry Couch. Our ambitious team is based in Russia and consists of 15 passionate people who can’t imagine their lives without making games. Feel free to support us by following Black Skylands, adding it to your wishlist and joining us on social media, Reddit and Discord!