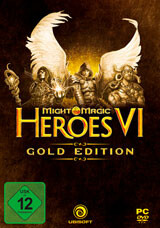 Add Might & Magic Heroes VI Gold Edition to your wishlist

The Strategy/RPG series is back in a new legendary enhanced edition, featuring the critically acclaimed Heroes VI, two original Adventure Packs and the majestic Townscreens.

Live an epic story where Angels plot to end -- once and for all -- an unfinished war with their ancient rivals, the Faceless. Control the destiny of the Griffin family in this chaotic period.

Crag Hack, the famous barbarian, has been hired to defeat a sinister cult. It’s time again for this legendary Hero to be called out of retirement and embark on a new and perilous adventure.

Control the destiny of Sandro, the greatest villain of Might & Magic, as he defies men and Dragon Gods, carefully planning events that will change Ashan forever.