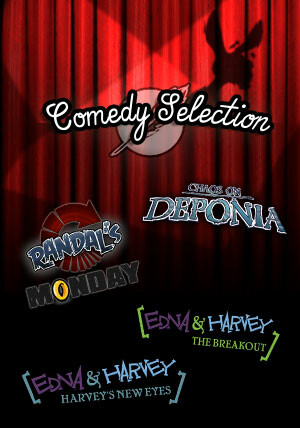 Add The Daedalic Comedy Selection to your wishlist

Other versions The Daedalic Comedy Selection

Description of The Daedalic Comedy Selection

Buy The Daedalic Comedy Selection as a Steam Key.

After the events on Deponia, it seems that Rufus came to his senses. He's grown prudent, amicable, kind and caring, without any intention to cause major mayhem just to further his own selfish ends. It seems he is far from chaining himself to flaming saw blades, training torpedo-dolphins or foraging through platypus nests. Or is he?

At the beginning, young Edna wakes up in the padded cell of an insane asylum with no memory of her past. She doesn’t have the slightest idea how she wound up there, but one thing is for sure, she wants out! After all, she feels perfectly sane – and her talking stuffed bunny Harvey agrees completely. Together, they attempt an escape and, in doing so, meet their extremely bizarre fellow patients – from the man in the bee costume to the pseudo-Siamese twins Hoti and Moti. But Dr. Marcel, head of the asylum, will stop at nothing to keep Edna from escaping. What does he have planned for her? And why was her memory erased? Gradually, Edna regains her memory of the time before her detention in her cell…

A kleptomaniac, a sociopath and a horrible friend. Randal is potentially one of the most scurrile protagonists since the invention of the hoverboard. Randal's Monday is a crazy space-time odyssey in classic adventure design, spiced up with countless geek culture references of the last 30 years.

Problems with The Daedalic Comedy Selection?