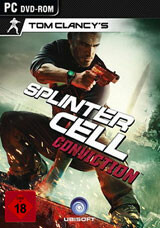 For years, Sam Fisher has been off the grid and on his own, tracking his daughter's killer. The trail leads to the last place Sam wants to see again: Washington D.C. Now Sam must work with old friends he can no longer trust, forced to save a country that used him and threw him away.

Unless he can stand against both a vast, faceless enemy and a corrupt Third Echelon, he'll never know the truth of what happened to his daughter.

Become an enemy of the state, embroiled in a conspiracy that leads all of the way back to Capitol Hill, in Tom Clancy's Splinter Cell Conviction.

Sam Fisher is back, but he's not playing the good guy any more. Gaming's most dangerous super spy has quit working for the Third Echelon, disgusted by his old department's corruption and distraught over the loss of his daughter. When he discovers her death was no accident he begins to track down those responsible...

Now that he's on his own and out for revenge there's less emphasis on stealth and more on all out action and unrestricted body counts. Environments are more interactive too, with almost any object ready to be used as a weapon. Plus you can climb onto and around almost every piece of architecture to set-up your ambushes.

Not only are the graphics better than ever but they're cleverer too - displaying mission objectives on the side of walls and using new visual aids to help keep you one step ahead of the terrorists.