BANDAI NAMCO's Arcade Flight Simulatior - Ace Combat 7: Skies Unknown takes off on February 1st on PC. The new Ace Combat replicates dogfights in a realistic way and puts you in the cockpits of various aircraft that are tailored to individual needs. The publisher presents the two-seater Su-34 Fullback in a new, short trailer showing off it's advantages. Su-34 is a fighter-bomber aircraft designed primarily for tactical deployment against ground and naval targets.

Ace Combat 7: Skies Unknown is a game which fills niche that, especially on PCs, has been neglected for years. Ace Combat 7 looks like a military flight simulation, but does not overwhelm you with an ultra-complex control. The series were always equally suitable for sim fans and arcade action players who seek spectacular dogfights. AC7 presents new mechanics where the weather and surroundings have an influence on flight behavior. The cockpit designs have been improved and inspired by the original aviators giving a realistic pilot feel.

Ace Combat 7: Skies Unknown will be released on February 1, 2019 for PC. Order the game now with 17% discount or the Deluxe Edition 15% cheaper and secure a nice pre-order bonus package, which contains: 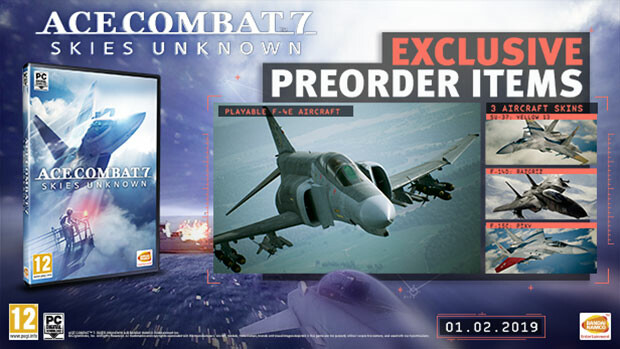