Digimon Survive presents a hybrid visual novel and tactical RPG set in a mysterious world filled with dangerous monsters and deadly battles that will test your ability to survive.

Monsters at the ready as Digimon Survive is now available!

We have had to wait four years since the announcement of Digimon Survive, which was first revealed in July 2018. Later this week the monsters will be unleashed on July 29th 2022.

In contrast to the previous Digimon games, the game will offer a mix between the turn-based strategy RPG games and the world of a visual novel. Those who expect a game that is even more related to the anime will not be disappointed. In Digimon Survive, you follow the story led by Takua Momozuka, who accidentally ends up in a world inhabited by Digimon and experiences exciting adventures there. With a group of teenagers, you get lost during a school camping trip and find yourself in a strange new world full of monsters and dangers.

Digimon Survive's karma system is divided into three attributes: "Morale", "Harmony" and "Anger". Depending on the choices you make throughout the story, one of the three attributes will stand out as the leading attribute.

During the course of development, Habu Kazumasa had contact with Hiroyuki Kakudo, the main creator of the Digimon Adventure anime series. A central point in the conversation between the two was the origin of the monsters.

Although the name Digimon is not far-fetched from "Digital Monster", the main creator of the anime-series Digimon Adventure Hiroyuki Kakudo has told us that they are not digital creatures as the name suggests. Instead, they use technology to better communicate with humans. Digimon look for human partners to make a pact with. Communication with humans is done through digital means simply out of convenience of use in our times.

You can now buy Digimon Survive Month 1 Edition from Gamesplanet and save 15% off. If you purchase during the first month you'll receive the following content as a bonus:

Trainable unit, Extra Monster: Guilmon
Guilmon is a Free Monster, requiring Evolution items found through exploration or battle to evolve it. Note that Free Monsters cannot be devolved after evolution. 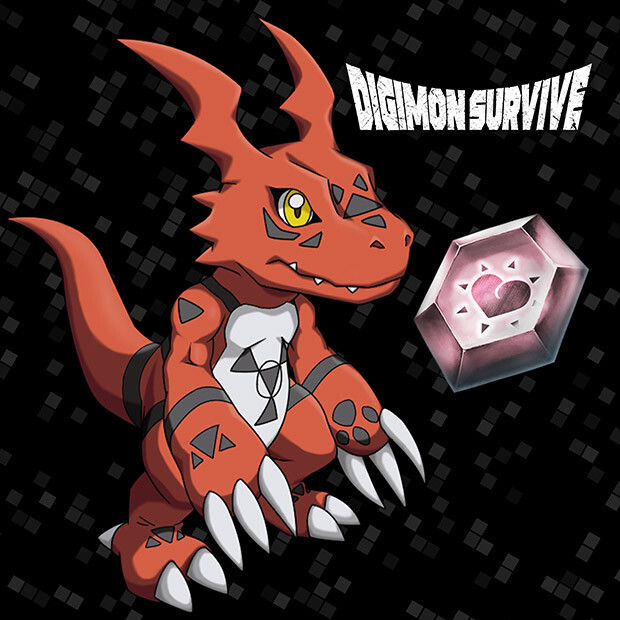