Pilot a heavily armed Gravcycle in Disintegration, a new sci-fi first-person shooter unlike any other. Command your troops on the ground as you battle through a thrilling single-player campaign.

Command a squad of troops next month when the long awaited First Person Shooter Disintegration launches on June 16th. Created by V1 Interactive, which was founded by the Halo 1 creative director Marcus Lehto and SOCOM director Mike Gutmann. Like Halo and Destiny, there is a heavy focus on first person story, with a deep single player campaign and also tense multiplayer battles which pits pilots against one another.

You play as Romer Shoal, a pilot who must fight to Reboot Humanity against Black Shuck and the domineering Rayonne forces bent on eliminating human society. Learn more about the story with a brand new trailer while you wait!

Disintegration is launching on June 16th. Pre-order to get the following bonuses for free: 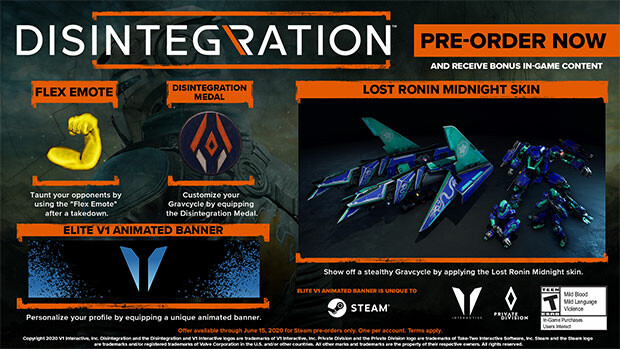