The best-selling franchise returns this year with a complete overhaul of the graphics engine, offering the most striking and immersive visuals and effects, along with the deepest and most complete farming experience ever.

Big wheels keep on turning when Focus Home Interactive and Giants Software return to the fields later this year with the release of Farming Simulator 19 Platinum Edition on October 22nd. This brand new Edition of the game will contain Farming Simulator 19, plus the upcoming Platinum Expansion in one package. The expansion will bring new vehicles and tools to the popular Farming simulator game with new the addition of the CLAAS brand. Get behind the wheel of CLAAS vehicles such as the LEXION 8900, the JAGUAR 960 TT, and the XERION 5000 for a deeper farming experience than ever before

This brings the total number of vehicles and tools to over 380, which will allow provide players with hours of gameplay. Take a look at some farming action from Gamescom with a brand new trailer to show off the game! 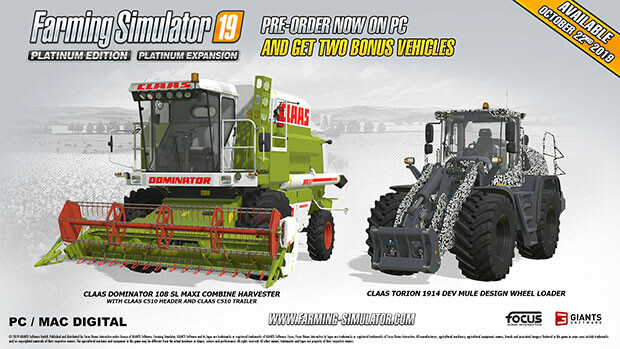