Farming Simulator 22: How the GIANTS version differs from the Steam version

Gamesplanet is an official partner of GIANTS Software, the developer and publisher of Farming Simulator 22. On Gamesplanet you have the possibility to buy either the GIANTS or the Steam Key for the activation of FS22. We explain what the differences are between the two versions.

Both variants offer the same advantages for you, as far as the content is concerned. This means that regardless of the type of activation key, the pre-order extras are included. And of course, the main game, Farming Simulator 22, is absolutely identical as well. Steam and GIANTS players can also participate in multiplayer games together. Steam offers advantages (independent of the platform's community features) in that games are kept up-to-date on demand. If there is an update for the FS22, Steam optionally updates the game completely automatically. With the GIANTS version of FS22 you have to trigger updates manually.

Important: GIANTS Software usually offers future expansions for Farming Simulator 22, which we will also sell. Please make sure to buy keys for your add-ons/DLCs that match the activation type of the main game. So if you buy FS22 as a Steam key, add-ons should also be bought as Steam keys in the future.

Pre-order Farming Simulator 22 now on Gamesplanet, choose your favorite activation method, and reserve the much sought-after CLAAS XERION SADDLE TRAC Pack as a bonus with your pre-order! 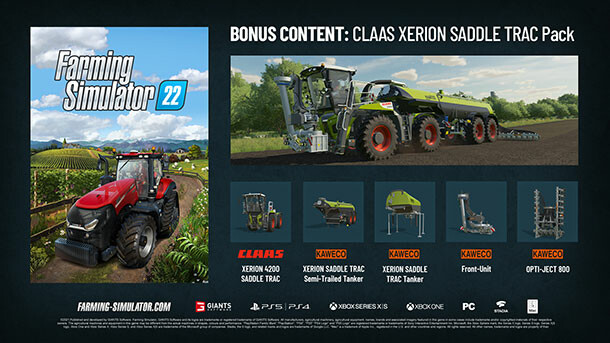