Become a Hired Gun. The money’s good, the dog’s loyal, and the gun’s reliable. Embark on a fast-paced, violent, and thrilling FPS set in the darkest reaches of Warhammer 40,000’s most infamous hive city.

The French development studio "Streum on Studio" most recently made a name for itself with Space Hulk Deathwing. So the Warhammer theme is not new to the developers. With Necromunda: Hired Gun, the team is once again creating an action title in the Warhammer 40k universe. The fast-paced first-person shooter will also be released for PC on June 1st 2021 and now a brand new gameplay trailer for Necromunda: Hired Gun has been released today. DOOM fans will probably heave the title into their shopping cart with a 20% discount right after that.

In the sinister hive city of Necromunda, anything is possible if you just have the right skills or enough cash to fulfil your desires, such as a full armoury. In Necromunda you are out and about as a bounty hunter, shooting your way through different areas, clearing out hidden chests and expanding your aggression potential with various weapons and extras.

Even at first glance, the gameplay trailer makes it clear: Necromunda: Hired Gun follows inspirations from games such as DOOM. Between the countless hordes of enemies, there is hardly any time to let your gun barrels cool down. A hellish place! However, Hired Gun shines with some gameplay features not found in DOOM. For example, you have the option to use a cyber-augmented dog (Mastiff) on your opponents. The four-legged friend is very helpful when it comes to completing bounty missions and then collecting the money. You might even get a treat or two for the dog.

Adapt your equipment loadout to the different requirements of the missions before you get lost in the dark corridors and shafts of the Necromunda Hive. Wits alone won't be enough to survive in the world of Necromunda: Hired Gun so you'll need to use a variety of knives, rocket launchers or graviton rifles to stay alive. The game also tests your gamer skills in other ways, for example when it comes to skilfully crossing areas using wall runs, jumps and a grappling hook.

Necromunda: Hired Gun will be released on June 1st and you can already pre-order the title with a 20% discount on Gamesplanet. It's not only worth it because of the low price, but also because we're including the Hunter Reward Pack for pre-order customers. 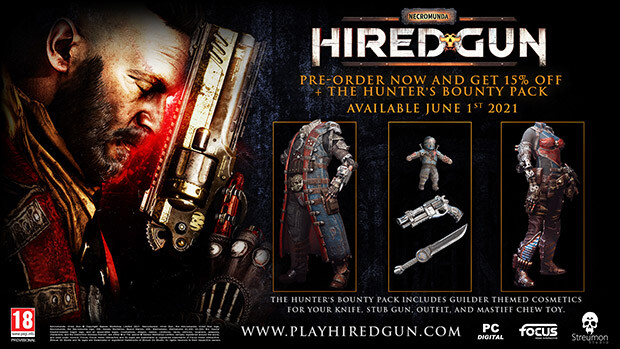