Originally created by legendary game designer Sid Meier, Civilization is a turn-based strategy game in which you attempt to build an empire to stand the test of time. Become Ruler of the World by establishing and leading a civilization from the Stone Age to the Information Age.

Civilization 6: New Frontier Pass launching May 21st, will include new leaders and cultures!

Developer Firaxis announces new content coming to their popular strategy title Civilization 6 with the reveal of the New Frontier Pass launching on May 21st. Includes new leaders and cultures with 6 packs, plus free content for all!

Get ready for another trip back in time as publisher 2k Games and developer Firaxis have announced plans to release the New Frontier Pass for their popular historic strategy game Civilization 6, due for release almost 4 years after the release of the game itself on May 21st. While fans are waiting for a possible 7th entry in the series, this should no doubt keep everyone happy as both paid and free content are on the way.

The announcement of the New Frontier Pass is accompanied by a video update from 2K and Firaxis, in which the developers have their say and at least give us an idea of what to expect from the upcoming content. Lead Designer Anton Strenger speaks of a full year of updates with monthly updates for New Frontier Pass holders. Nine new leaders and eight civilizations, such as the Mayan indigenous people, will be provided by the New Frontier Pass for Civilization 6, among others.

Note: Some of these changes require other expansions to Civilization 6, such as the [Gathering Storm] add-on (https://gamesplanet.com/game/sid-meier-s-civilization-vi-gathering-storm-steam-key--3031-11) or Rise and Fall. 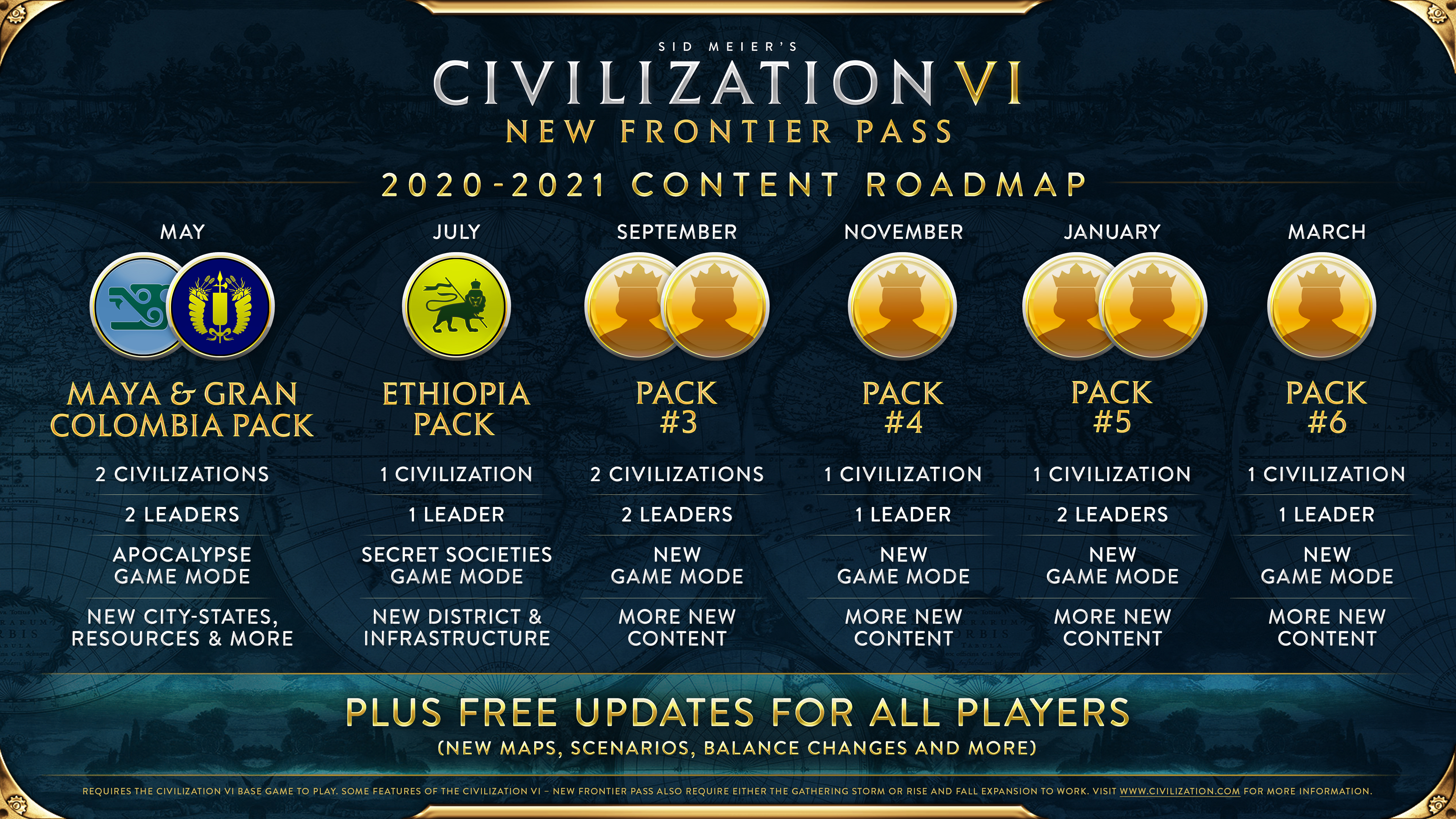 2K and Firaxis are also offering additional bonuses for all future New Frontier Pass holders: the Teddy Roosevelt and Catherine De Medici Persona Packs. Inside are new skins for the American and French heads of state, new leader images and leader backgrounds, updated agendas and gameplay bonuses. For example Teddy will be better equipped to keep the peace and Catherine might gain the upper hand in the trade by trading luxury goods. These bonuses are exclusive to the New Frontier Pass owners and will be delivered when the second add-on pack launches.

The Civilization 6: New Frontier Pass launches on May 21st 2020 and will be soon available at Gamesplanet to order.