For Supermassive Games upcoming story driven game The Dark Pictures Anthology: Man Of Medan (available August 30th) it'll be possible to play solo or team up with others in multiplayer. In the first part of the developer video series "Don't Play Alone" the developers of Supermassive Games spoke about the "Shared Story" mode of Man of Medan. Today, in the second part of the series, we're introduced to the "Movie Night" mode, which is another multiplayer mode that can feature groups of players working together. Groups of players who want to experience Man of Medan's horror setting together simply share the couch and controller. At the beginning you assign protagonists from the game to different players and whenever it's time to change the controller, Man of Medan will point this out to you. Then the current player has the possibility to influence the course of the game with their decisions. This may result in the death of another character, but Supermassive doesn't want to reveal whether this is really the case in the video. 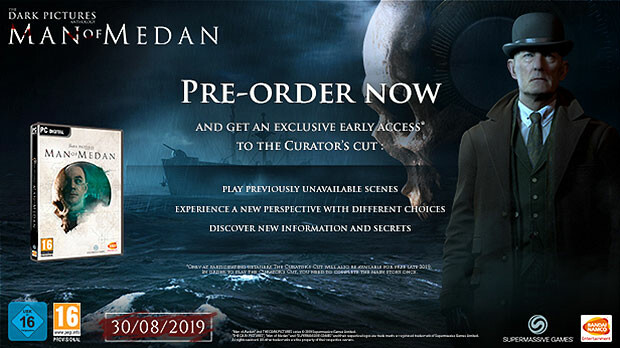