Add Orbital Bullet to your wishlist 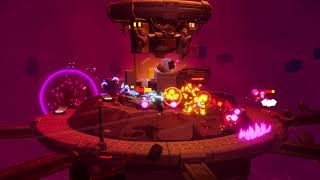 Buy Orbital Bullet as a Steam key at Gamesplanet.com

Kill. Die. Modify.
Orbital Bullet is a fast paced 360° action-platformer with rogue-lite elements, where all actions take place in a circular pattern. Fight your way through a variety of procedural planets and use body modifications, crafting, upgrades and heavy weaponry.