Call of Duty: Black Ops Cold War prepares to launch next week on November 13th, and now Activision have revealed exactly when we can begin preloading the game on PC. We've also received more information on the pre-order bonus that's included with your preorder!*

No doubt: If there was no preload phase for Call of Duty: Black Ops Cold War, Battle.net would grind to a halt on the day of release. Fortunately, we are allowed to start shoveling the data packets onto our PCs a few days before the release of COD BO Cold War. With an anticipated maximum installation size of 125 GB, you can imagine that the download will not be quick, but will take time (and space). Important: If you pre-order Call of Duty: Black Ops Cold War from Gamesplanet, you will be able to activate the game on your Battle.net account immediately after purchase and thus be well prepared for the upcoming preload. No waiting for keys, no delays, no hooks!

When does the preload for Call of Duty: Black Ops Cold War start?

Publisher Activision will release COD BO Cold War on November 13th on all platforms, including PC. Owners of the older console generation have the possibility to start the preload from November 6th, but PC gamers will start a little later:

Pre-loading will start on November 10th via the Blizzard Battle.net client. There you will find the entry "Call of Duty: BOCW" on the left side of the game library under "PARTNER GAMES". 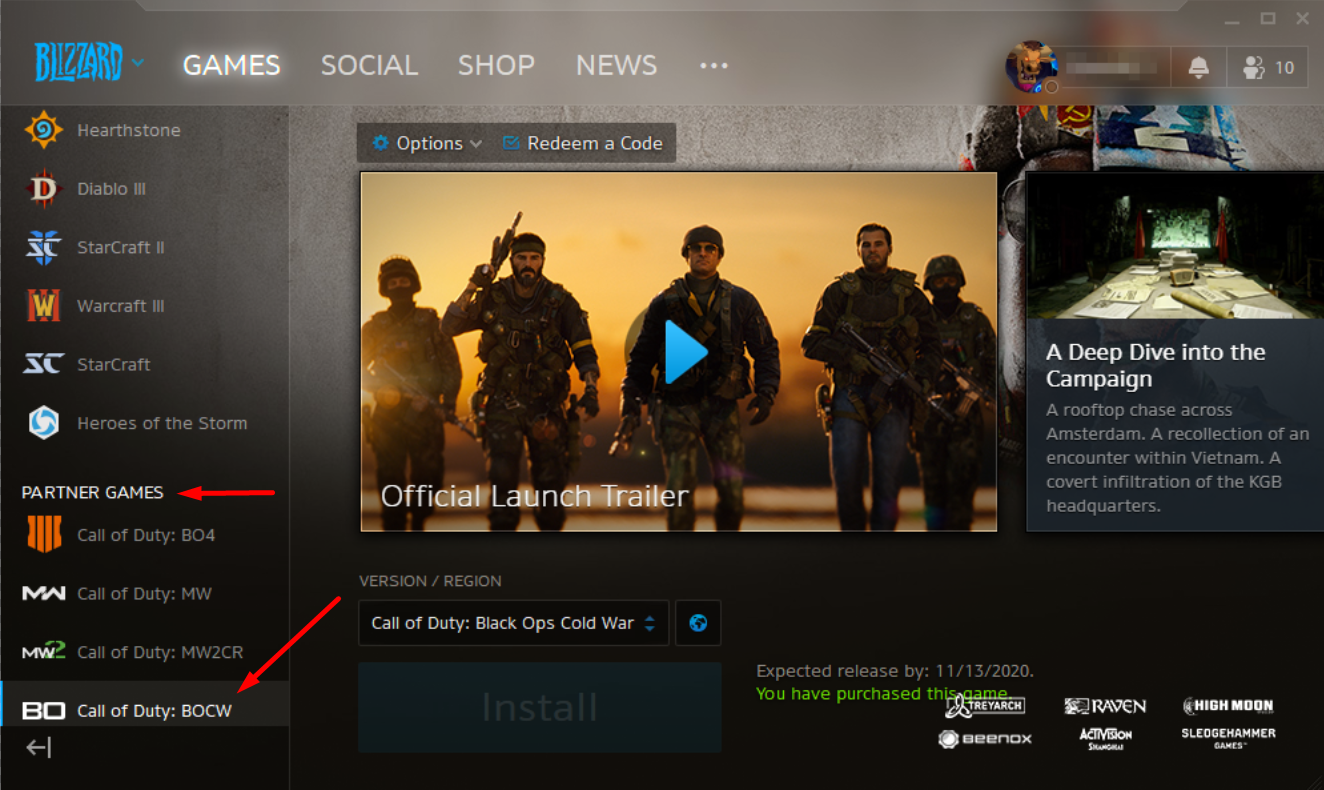 You might remember: COD Modern Warfare took up almost 240 GB of space for a while and the installation size could not be reduced at first. With COD BO Cold War this is different from the beginning, as seen with the recent changes Modern Warfare. PC Players will be able choose the content they want to install and will have the choice between three different installation sizes. Current sizes are accurate at time of publication, but may change in the future.

PC gamers also have the option of uninstalling certain game modes at a later date, such as the single player campaign or the zombies game mode. This further reduces the amount of memory required.

Pre-order to get the Confrontation Weapon Pack

If you pre-order COD BO Cold War from Gamesplanet, you will receive the extras for COD Modern Warfare and Warzone (Woods Operator Pack) as well as the Confrontation Weapon Pack, which includes two free weapon blueprints for use in COD BO Cold War from release. Once you have unlocked the Create a Class option in Cold War, you can immediately add the weapons to your loadouts. The following two rifles are included:

The Iron Curtain: An Assault Rifle based on an iconic Soviet heavy-hitting weapon
Western Front: A three-round burst Tactical Rifle with plenty of patriotic flare

Each weapon blueprint contains five attachments for you to customise your gun of choice before unleashing it in-game. You can find the plans for the weapons in the equipment menu and in the Create a Class section. Call of Duty: Black Ops Cold War is launching on November 13th 2020 and if you pre-order Cold War now you will have immediate access to the Woods Operator Pack for Call of Duty: Modern Warfare and COD Warzone. See our Version Comparison for more help!