Master the art of starfighter combat in the authentic piloting experience Star Wars™: Squadrons. Buckle up and feel the adrenaline of first-person multiplayer space dogfights alongside your squadron. Pilots who enlist will step into the cockpits of starfighters from both the New Republic and Impe...

Star Wars: Squadrons gets a short prequel movie ahead of release!

Pilot legendary ships in Star Wars: Squadrons when it takes flight on October 2nd 2020. Learn more about the story with a new prequel film released by EA, that tells the story of pilot Varko Grey while you wait!

The galaxy calls out for pilots next month when the upcoming Star Wars Squadrons launches on October 2nd. Before that, publisher EA has treated fans to a short pre-quel film that takes place before the events of the game. Created between Lucasfilm, Motive Studios and ILM, this 7 minute short features plenty of Star Wars space action with CGI-rendered shots showing off some of the action we can expect in the game. This is a must watch for those looking to jump into the cockpit of their own X-Wing or TIE Fighter at launch!

The Empire’s retreat after a surprise attack marks yet another stumble in the wake of the second Death Star’s destruction. But for one member of Titan Squadron, the battle is far from over. Squadron Leader Varko Grey finds himself as the last TIE pilot on the battlefield, hunted relentlessly by a renegade New Republic X-wing in this standalone STAR WARS: Squadrons story. Made in collaboration by Motive Studios, Lucasfilm, and ILM, "Hunted" is set before the events of STAR WARS: Squadrons, introducing you to one of the ace pilots who you'll be fighting alongside in the story to unfold.

Of course, this new "Hunted" video is not just any little movie from said film studios. The clip also introduces you to the contents of the Star Wars: Squadrons, which will be released on October 2nd. For example, you get to know the Imperial elite pilot Varko Grey, with whom you will also do your rounds in squadrons on the flat screen (or in VR). A New Republic attack on the Imperial shipyard near Var-Shaa is successful for the "good guys", but the Station and Stardestroyer are lost in laser fire and Grey finds himself alone in the midst of enemies on a planet. There, Squadron Leader Grey and his TIE Interceptor take on a renegade X-Wing of the New Republic.

Star Wars: Squadrons will offer you a believable Star Wars experience with action-packed starfighter battles on October 2nd 2020. Pre-order Star Wars Squadrons now on Gamesplanet and get the following cosmetic extras with your pre-order: 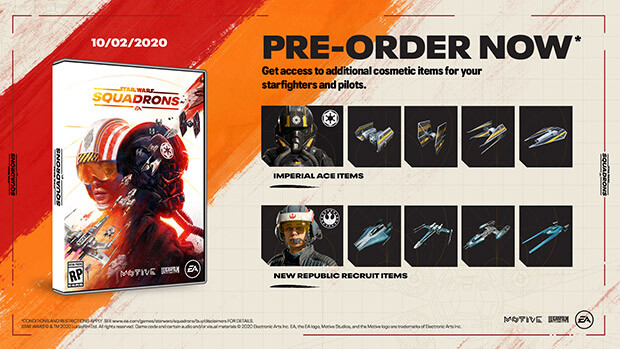