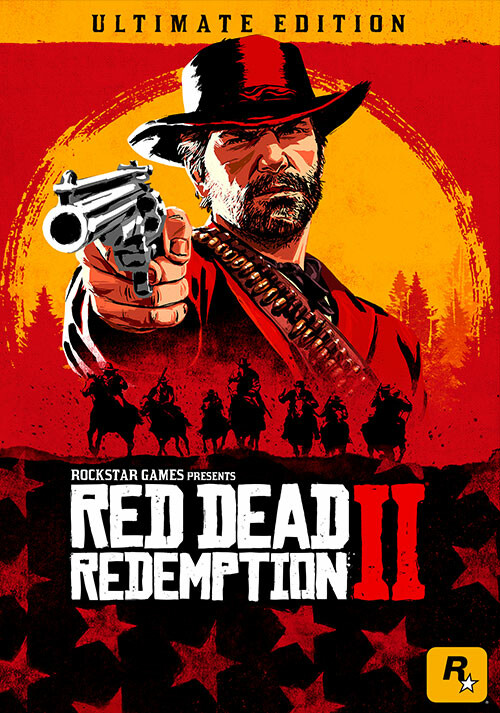 Red Dead Redemption 2 - Everything you need to know!

Saddle up and explore the wild west when Red Dead Redemption 2 comes to PC on November 5th. Get up to speed with the game in our handy recap guide while you wait! What is Red Dead Rede...

Saddle up with the Red Dead Redemption 2 Launch Trailer

Ride into the open west next week when Rockstar Games' epic open world western sequel Red Dead Redemption 2 makes the jump to PC on November 5th. Play as Arthur Morgan, a member of the Va...

The Red Dead Redemption 2: Ultimate Edition delivers all of the Story Mode content from the Special Edition plus additional content for online including Bonus Outfits for your online Character, Rank Bonuses, Black Chestnut Thoroughbred and free access to the Survivor Camp Theme.

Plus get free access to Additional Weapons in online.

America, 1899. The end of the wild west era has begun. After a robbery goes badly wrong in the western town of Blackwater, Arthur Morgan and the Van der Linde gang are forced to flee. With federal agents and the best bounty hunters in the nation massing on their heels, the gang must rob, steal and fight their way across the rugged heartland of America in order to survive. As deepening internal divisions threaten to tear the gang apart, Arthur must make a choice between his own ideals and loyalty to the gang who raised him.

With all new graphical and technical enhancements for deeper immersion, Red Dead Redemption 2 for PC takes full advantage of the power of the PC to bring every corner of this massive, rich and detailed world to life including increased draw distances; higher quality global illumination and ambient occlusion for improved day and night lighting; improved reflections and deeper, higher resolution shadows at all distances; tessellated tree textures and improved grass and fur textures for added realism in every plant and animal.

Red Dead Redemption 2 for PC also includes additional Story Mode content including Bounty Hunting Missions, Gang Hideouts, Weapons and more; plus free access to the shared living world of Red Dead Online featuring all previously released improvements and the latest content for the complete Online experience including Frontier Pursuits and the specialist Roles of The Bounty Hunter, Trader and Collector, and much more.

Red Dead Redemption 2 for PC is the ultimate way to experience one of the most critically acclaimed games of all time, winner of over 175 Game of the Year Awards and recipient of over 250 perfect scores.

Software license terms in game and at www.rockstargames.com/eula; online account terms at www.rockstargames.com/socialclub. Non-transferable access to special features, such as exclusive/unlockable/downloadable/multiplayer/online & bonus content/services/functions, may require single-use serial code, additional fee, and/or non-transferrable online account registration (varies 13+). Special features access may require internet connection, may not be available to all users or at all times, and may be terminated/modified/offered under different terms without notice. Violation of EULA, Code of Conduct, or other policies may result in restriction or termination of access to game or online account. For info, customer & tech support visit www.rockstargames.com/support. This game is fictional. It may depict people, places, companies, groups, events, buildings, and other things that are similar to those in the real world; they are not affiliated or associated in any way with this game, and such depictions are not factual. The makers/publishers/licensors of this video game do not endorse/condone/encourage any content. Unauthorized copying, alteration, reverse engineering, decompiling, transmission, public performance, rental, pay for play, or copy protection circumvention is prohibited & violates EULA. Certain limits apply to purchase, use, and redemption. See EULA www.rockstargames.com/eula and Terms of Service www.rockstargames.com/legal for details.

Rockstar Games, Inc. ©2005-19. Rockstar Games, Red Dead Redemption, R*, Redemption, Red Dead, Dead Eye are marks/logos/copyrights of Take-Two Interactive. Dolby and the Double-D symbols are trademarks of Dolby Laboratories. The ratings icon is a trademark of the Entertainment Software Association. All other marks and trademarks are properties of their respective owners. All rights reserved.

Over time downloadable content and programming changes will change the system requirements for this game. Please refer to your hardware manufacturer and www.rockstargames.com/support for current compatibility information. Some system components such as mobile chipsets, integrated, and AGP graphics cards may be incompatible. Unlisted specifications may not be supported by publisher.