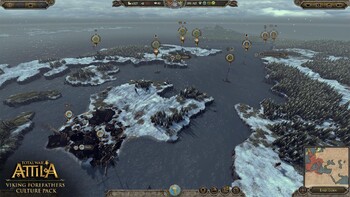 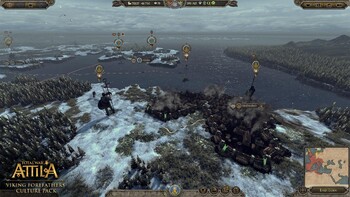 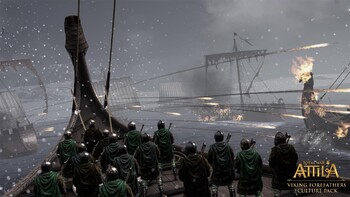 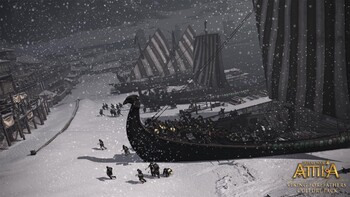 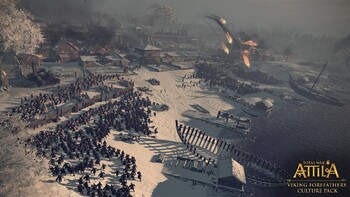 The Viking Forefathers Culture Pack adds The Norsemen as a new playable culture to Total War™: ATTILA. These factions may be used in Single or Multiplayer Campaign modes and Custom and Multiplayer battles.

With the Viking Forefathers at their command, players can marshal the forces of The Geats, The Jutes and The Danes as they launch southwards from their icy homelands on campaigns of looting, raiding and conquest. In the bitter, windswept north, hard winters breed hard men, and Norse warriors are redoubtable in combat on land and sea. To these natural seafarers and expert coastal raiders, the plentiful lands to the south promise glorious victories and great plunder!

All Norse factions bear a unique trait which further defines their strengths and play-style in the Grand Campaign.

The Danes: Seaborn
Immune to both high-seas attrition and seasickness, The Danes are able to weather the worst maritime conditions and make full use of their land units in naval conflict.

The Geats: Cold Blood
The hardy Geats are raised in icy climates. As such they benefit from a morale-boost when fighting in winter and are immune to snow attrition.

The Jutes: Despoilers
The Jutes are the ultimate profiteers in war, and gain significant income from razing settlements and destroying units in battle.

Players using Norse factions will receive a unique series of mission objectives over the course of the campaign.

Each of the three Norse factions can recruit two unique units in battle:

Thrall Spears
Plentiful and Inexpensive, Thrall Spears can form a defensive backbone for any army.

Thrall Spearmen Thrall Spearmen represent a solid anvil for the enemy to spend his cavalry against, and can pack a deadly punch on the charge with their javelins.

Huscarls
The fearless Huscarls hurl themselves into battle, carving a gory path through the enemy ranks with their axes.

Royal Huscarls
Disciplined, highly trained and more heavily armoured than other axe units, the Royal Huscarls strike fear – and sharpened steel – into the hearts of their foes.

The seagoing Danes may recruit the fearsome Drekkar Dragonship manned with two extra varieties of troop options. These rugged warships can withstand much punishment before delivering some of the Viking Forefathers’ most powerful and vicious melee warriors – the Chosen Norse Marauders and the Elite Norse Marauders - into the fray.

Alongside elements from the Barbarian battlefield unit roster, The Geats, the Jutes and the Danes can field specific Norse units in battle on land and sea.

The Danes
The Danes, or Dani, have achieved that rarest of marriages: barbarian vigour coupled with civilised sophistication. As the most southerly of the Norse kingdoms, they came into contact with the southern European peoples early on, treating them with an uncharacteristic openness.

After this, many left their lands to seek their fortunes elsewhere, returning with more than just gold. One recognised the potential of the Roman alphabet, adopting it to suit his native tongue and the writing materials available in the north. This led to the creation of the first runic alphabet, which rapidly spread across northern Europe, greatly enhancing the Nordic peoples’ culture and trade, resulting in the creation of objects combining both exotic resources and traditional Nordic styles.

However, neither wealth nor culture has dampened the Dani’s desire for conquest. Many northern tribes plunder foreign shores yet neglect their own; not so the Dani. Poised to take advantage of the ensuing upheaval, they strive to forge a grand Nordic empire to outlast that of Rome!

The Geats
Legendary ancestors of Beowulf, the Geati manifest all the intrepid boldness of the famous hero. From their stronghold on the southern tip of the Swedish peninsula they have naval access to the whole of northern Europe, allowing them to launch frequent raids without fear of retribution. The most glorious of these exploits are told in the Geati’s rich oral tradition, immortalising their leaders and inspiring a new generation to seek glory.

While the arrival of the Huns in Europe has meant disaster for most, for the Geati it is just another opportunity. Recently their king, Gizur, led a force into central Europe to fight alongside the Goths in exchange for Roman gold and goods – there are rich pickings to be gained fighting for the highest bidder in the south. Crisis is blooming in these fertile lands, and the Geati are determined to be at its heart, profiting from it.

The Jutes
The ocean laps the coasts of Juteland, summoning its inhabitants to new adventures and conquests. As such, the Juti have always been the most intrepid of the Norse-speaking peoples, looking to distant shores or clashing over the sparse northern lands. Accordingly, they are in the perfect position to profit from the slow collapse of Roman Britannia, and relentlessly plunder its coast as its defenders dwindle in number.

The Juti leadership use the spoils of their raids to make exquisite, prestige goods. Should the Juti succeed in conquering Britannia, many more will no doubt be forged. A successful conquest would be a great undertaking, and one requiring them to draw on the very depths of their fortitude.

To drive out the remaining Romans, subdue the belligerent locals, and foil the ambitions of their Saxon neighbours who also covet this green and pleasant land – the Juti have vowed no less!