Add Kapital: Sparks of Revolution to your wishlist 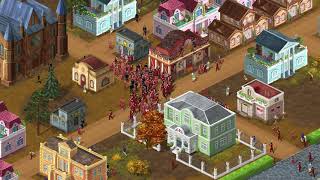 Description of Kapital: Sparks of Revolution

Buy Kapital: Sparks of Revolution as a Steam key at Gamesplanet.com

Kapital is a hybrid of city-builder and society management game. You play as a new mayor of the city that was recently destroyed by war. Your goal is to restore the city to former glory by managing limited resources, resolving social conflicts and overcoming crisis situations.

DIVIDED SOCIETY
The population of your city consists of 3 classes: nobles, bourgeois and workers

CRISIS MANAGEMENT
Rebuilding the city is not an easy task. Your resources are limited, so you have to decide who will get food and shelter first. Be prepared to face new threats on a regular basis.

PROTESTS AND RIOTS
There is no way you can make everyone in the city happy. People with unsatisfied needs will protest and riot. You have to decide which class to support and which to suppress.

SHAPING THE FUTURE
As a ruler of the city, you have the power to bring new laws which shape your society. Which class will become dominant in a new political system? Only you have the answer.

Problems with Kapital: Sparks of Revolution?

To install and launch Kapital: Sparks of Revolution Demo, you need to have the Steam application installed. Is Steam installed on this computer?