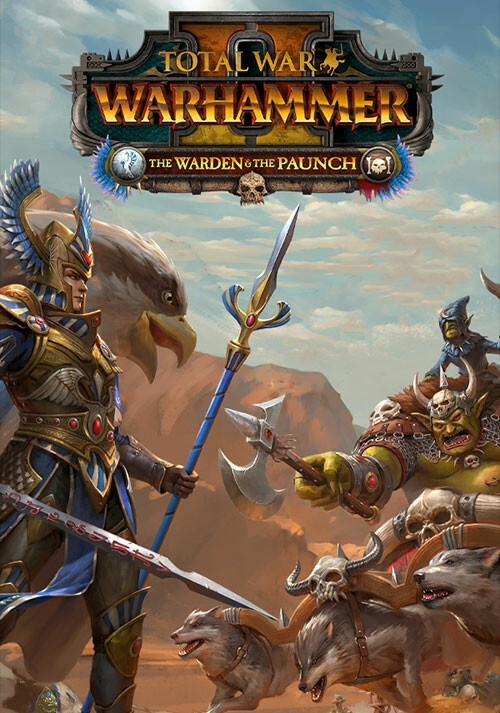 Add Total War: WARHAMMER II - The Warden & The Paunch to your wishlist 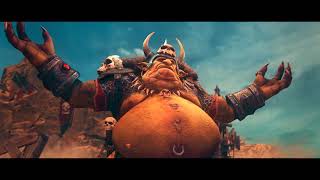 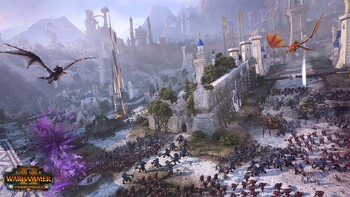 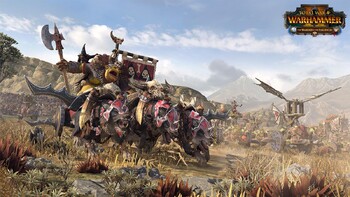 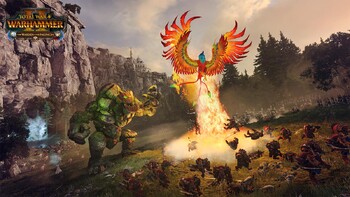 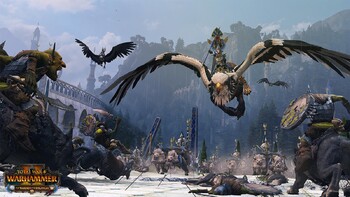 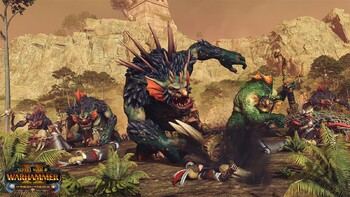 Description of Total War: WARHAMMER II - The Warden & The Paunch

Buy Total War: WARHAMMER II - The Warden & The Paunch as a Steam Key.

The Warden & the Paunch is the latest Lords Pack for Total War: WARHAMMER II. Introducing two rival Legendary Lords from the world of Warhammer Fantasy Battles, each with their own factions, objectives, mechanics, units and playstyle, for use in both the Eye of the Vortex and Mortal Empires campaigns, and custom/multiplayer battles.

Eltharion the Grim commands Yvresse (High Elves) while Grom the Paunch leads the Broken Axe Tribe (Greenskins). Neither Yvresse nor the Broken Axe tribe are involved in the Vortex race, but are pitted against one another as eternal nemeses, on a collision course to a final climactic encounter where only one can emerge the victor.

Long has Eltharion the Warden of Tor Yvresse stood sentinel, ever-watchful for signs of Greenskin incursion. While he campaigned overseas against the Druchii of Naggarond in ages past, Tor Yvresse nearly fell as the green tsunami of Grom the Paunch’s legendary Waaagh! roared through Ulthuan. After defeating Grom and scattering his hordes, Eltharion swore that no Orc or Goblin filth would ever set foot in his lands again.

But Grom has other designs. His cavernous belly aches for a rematch, and his hunger for vengeance is matched only by his titanic appetite. As his gobbos tend to the bubbling cauldron, delighting him with each tasty new morsel, his plans begin to set. He’ll gather them all, the bosses and the boys, wind them up to a fever pitch, and lead them on a Waaagh! the likes of which the world has never seen. This time, Tor Yvresse will fall, and its snooty Warden will kneel before the mighty Paunch!

In a secluded Yvresse mountainside lies Athel Tamarha, Eltharion’s base of operations. It lies in ruins, untouched since Grom’s previous Waaagh!, but Eltharion seeks to rebuild it in Tor Yvresse’s defence.

In Eltharion's campaign, Athel Tamarha is represented by a new panel where the player rebuilds structures to gain numerous unique benefits. In addition, Eltharion can use his unique Warden’s Cage ability against enemy Heroes and Lords in battle. Should they fall while under its influence, they will be imprisoned in Athel Tamarha for interrogation…

Athel Tamarha has a number of structures across two unique chains which can be rebuilt. Each enhances Tor Yvresse’s defence rating and grants the following:

Tor Yvresse will become progressively shrouded by an enchanted mist, enhancing all of Eltharion's troops and disrupting enemies caught within it.

Eltharion the Grim is the unflinching warden of Tor Yvresse. Atop his mighty Griffon, Stormwing, he swoops into battle with peerless conviction.

Eltharion wields a spear and a sword, as well as being a caster of High Magic. This offers him the flexibility to alter his role in battle based on the circumstances at hand. His defence-focused abilities also make him excellent at holding firm battle lines.

The High Elven Archmages are amongst the greatest practitioners of Magic within the mortal realms. With the introduction of the Archmage, High Elf players now have access to all 8 core Winds of Magic and the Lore of High Magic to choose from, ideal for those who prefer a more magic-focused playstyle.

High Elf Rangers are inhabitants of Ulthuan's more remote areas and are called upon in times of need.

Heavy Spear unit for High Elves. The Silverin Guard are tasked with defending the Watchstone of Tor Yvresse - a waystone of fabulous power.

These fearsome beasts are deadly hunting cats with a muscular frame and a sharp, cunning mind. Almost as tall at the shoulders as an Elven Steed, a War Lion is far stronger, able to break bones with each sweep of its claws and shatter even helmeted heads with a single chomp of its fanged maw.

Many of the Phoenix King's bodyguard ride to battle in Lion Chariots. Each of these white-timbered constructions is drawn by a pair of snarling War Lions whose savage power is belied by their feline grace and elegantly plaited manes.

The Arcane Phoenix is a majestic and fearsome creature with a wingspan as great as any of the mighty War Eagles of the High Elves. Cloaked in blazing feathers that can turn the sharpest arrow, it is the living embodiment of the destructive and purging Wind of Aqshy.

Swift and energetic, the Skyhawks never weary of battle, always standing ready to fight to the death if necessary.

Former training partners to the Warden himself in his youth, the Sentinels are amongst his most trusted servicemen.

The honour guards of the Warden’s tower are Tor Yvresse’s foremost defenders, and the anchor around which its armies gather.

Once of the household of Eltharion’s late father, the Faithbearers’ guilt over their master’s death drives them to fight to reclaim their valour.

Thanks to the challenges of training in their murky homeland, the Knights of Tor Gaval are rightly said to be amongst the most talented of wingmen in all Ulthuan.

The Talons of Tor Caleda are an elite unit for Archers who serve the Prince of Caledor.

Rahagra's Pride inherit their name from the fabled father of white lions.

Arcane Phoenixes are the companions of Asuryan the Creator, harbingers of woe and bearers of hope in equal measure. They are drawn from Asuryan's side when the Winds of Magic howl through the world of mortals in mighty storms, and in distant mist-shrouded Ulthuan the High Elves are forewarned of the coming of these magical tempests by the sudden manifestation of Arcane Phoenixes in the skies above their island home. They are a mixed omen; a symbol of destruction soon to come as well as the hope of rebirth.

Grom has an insatiable appetite, as his girth attests to. In a Grom campaign, you’ll find a variety of ingredients around the world with which to cook up a range of recipes. By combining different ingredients in Grom's Cauldron, Grom and his boyz will be able to feast and gain special powers.

During Grom’s legendary Waaagh!, his most trusted Shaman, Ol’ Blacktoof, nearly brought destruction to Ulthuan and beyond by felling the Elven Waystones and drawing their power into himself. Fate intervened in the form of Eltharion, who separated Blacktoof’s head neatly from his shoulders. But the shaman’s surging power helped him to cheat true death, and his disembodied head serves his master still.

Grom is the self-styled king of the goblins. He wields the mighty Axe of Grom, and rides into battle atop the sturdy Chariot of Grom, with his trusty Night Goblin Assistant and standard bearer, Niblet.

The presence of Grom near friendly troops inspires them with a leadership buff. If Grom makes his way into the fighting, that buff increases.

Grom is ALWAYS mounted atop the Chariot of Grom.

Giant River Troll Hags are hateful and bitter creatures, far larger and more dangerous than their common kin. These Lore of Death casters are invested with an innate ability to shape the Winds of Magic as they stir the brackish waters in which they dwell.

The Snotling Pump Wagon is a wooden fighting platform on wheels. Like a chariot, a Pump Wagon hurtles towards the foe to run them over. However, the Pump Wagon rumbles under its own power, with momentum provided by Snotlings, who frantically pump crude contraptions and cranks to drive the belts that turn the wheels.

Flappas are crude wings, attached to the side of the Pump Wagon, and flapped up and down by the actions of the crew. This allows the Pump Wagon to make short jumps as it bounces along.

These Pump Wagons are fitted with a roller studded with sharp spikes.

A River Troll somewhat resembles a riverbed: coated in sediment, slime, rotting vegetation, fish carcasses, and various other stinky detritus whose precise nature and origin are too horrible to contemplate. In all probability the River Troll’s stink is even worse than that of the riverbed, since one can add the Troll’s personal miasma to the ill-omened mélange of odours emitted from the mucky smears on its skin.

Stone Trolls are a distinct breed of Troll which live exclusively in caves and the mountainous regions of the world. Since they live on rocky mountains, they tend to consume large quantities of stone, the natural magical inertia of which imbues them with a certain degree of magical resistance.

Rogue Idols are mighty magical constructs with the ability to crush armoured knights, batter city walls and just about anything else that gets in their way with their brutal fists.

The most unhinged Snotlings attach really big explodin' spores to the front of their Wagons, which burst when the Pump Wagon hits anything.

Da Swamp 'Fings are a horrifying band of River Trolls which cause Terror and have Poison Attacks.

Keep an eye on our official website and social media channels for our first gameplay reveals for this DLC. Have a question? Read the Announce FAQ for more information.

Problems with Total War: WARHAMMER II - The Warden & The Paunch?