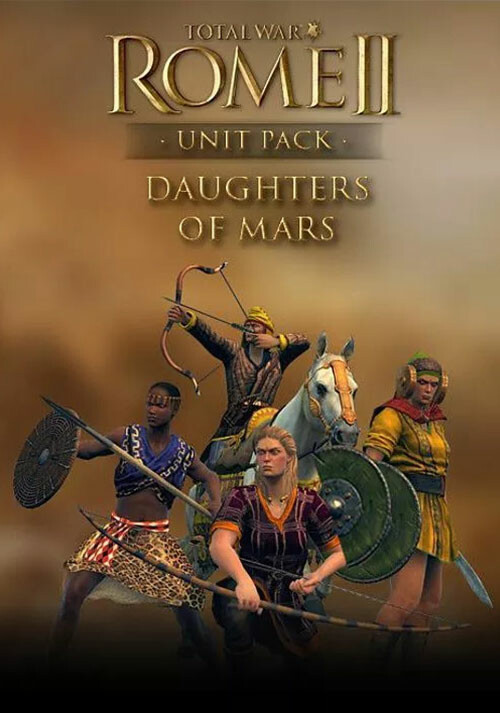 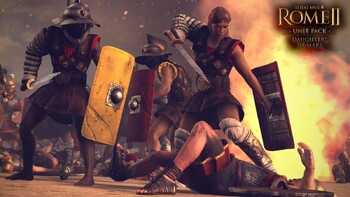 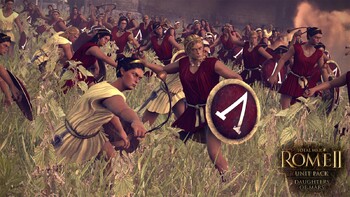 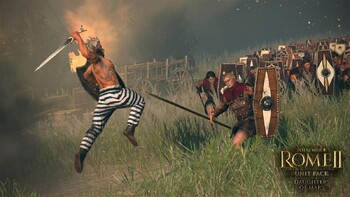 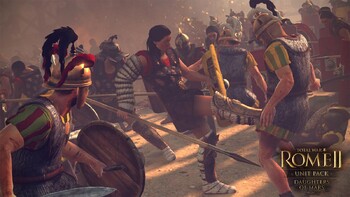 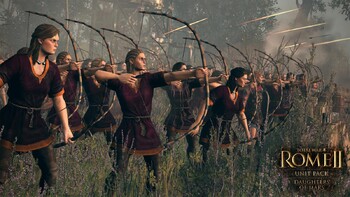 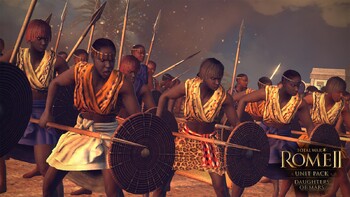 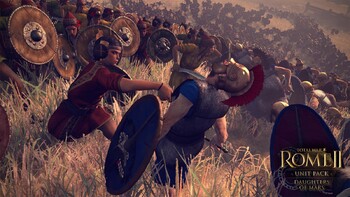 Athena, Bellona, Andraste, Mars: whichever war deity these soldiers pledged their lives to received a solemn promise of victory in the face of even the most formidable enemies. Whether in defence of their homelands, or called upon to fulfil their part in glorious conquest, female combat units featured throughout the ancient world. Adding a swift and deadly mix of fighting styles and abilities to the fray, generals will wisely place value on those who aspire to be the avatar of the war gods themselves!

Gladiatrices
Can be recruited by Rome, or as mercenaries in Italia. Honed to a razor-edge through countless drills and contests in the arena, Gladiators and Gladiatrices are ruthless and skilled brawlers. Their sledgehammer approach to melee brooks no compromise, and in the right circumstances, they can inflict heavy losses on traditional soldiery. Heavily armoured and disciplined, Gladiatrices are more formidable defenders than their arena-trained male counterparts, and every bit their equals in their lust for battle.

Mercenary Kushite shieldwomen
Can be recruited as mercenaries in Aethiopia. The fiercely independent Kushite Nubians are a geopolitical force to be reckoned with. Their mounted archers and skilled infantry have repelled Roman advances on multiple occasions, ably demonstrating their proficiency in large-scale battle. The zealous, spear-armed warriors of the Kushite Shieldwomen are swift, agile and deadly; able to strike swiftly from woodlands and trained to form up effectively in defence, Cavalry commanders would be wise to fear them.

Lusitani Swordswomen
Can be recruited by The Lusitani, or as mercenaries in Lusitania. Honed by generations of conflict and rightly feared for their lightning ambush tactics, The Lusitani have built a reputation as excellent guerrilla warriors. Trained to advance under the whittling fire provided by the Cantabrian Circle, their swift and hard-hitting Swordswomen are adept at exploiting woodlands to remain hidden while they move. When the charge comes, it is swift, sudden, frenzied and terrifying; though used carefully, Lusitani Swordswomen can also mount a formidable defence.

Cimbri Bow-Women
Can be recruited by The Suebi. Like many Germanic tribes, the dense woodlands of northern Europe have impelled the Suebi to develop superior guerrilla warfare techniques. Adept at making the most of cover and striking from a hidden position, the Cimbri Bow-Women are amongst the finest archers the Suebi can field. With superior weapon range and damage, they can wreak havoc before they are even detected. If attacked directly however, they can give a better account of themselves in melee than their principal role suggests.

Spear Gladiatrices
Can be recruited by Rome, or as mercenaries in Italia. Bringing the bloodthirsty and brutal melee techniques of the arena to the battlefield, Gladiatrices make excellent shock-troops. When armed with spears, these warriors gain a defensive edge over their sword-wielding battle-sisters, making them better prepared in the face of an assault. Arranged effectively, they can stop the hammer-blow of a cavalry charge in its tracks, and their frenzied riposte can inflict horrific casualties.

Gorgo’s Skirmishers
Can be recruited by Sparta, or as mercenaries in Hellas. The citizens of Sparta were among the finest infantry in the ancient world. With the Helots performing the ‘lesser’ functions of society such as agriculture, Spartan warriors were free to engage in the all-encompassing pursuit of excellence in combat. Athletics and weapon-drills were not the sole preserve of men, however. Faster-firing and heavier-hitting than standard sling-wielding units, Gorgo’s Skirmishers make a valuable addition to any Spartan force.

Spearwomen
Can be recruited by The Suebi, or as mercenaries in Suebia, Silesia, and Magna Germania. Independent, proud, and with powerful gods watching over them, The Germanic peoples are famed for their ferocious warriors. The women of the Suebi are no exception, and carry the will of the tribe into battle as ably as the men. Standing side-by-side with their Suebian Spear-Brothers, Spearwomen are exquisite defenders, capable of blunting a charge and instilling fear in the enemies of the tribe. Their training lends them versatility however, and they can quickly switch to an offensive role as the situation demands.