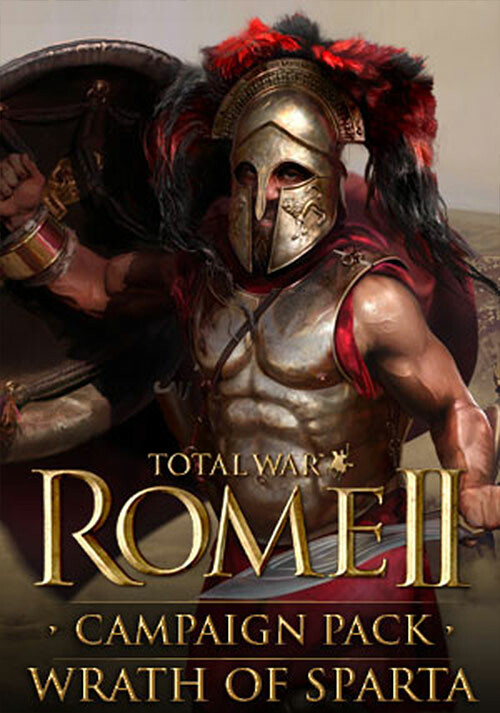 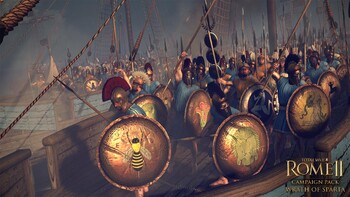 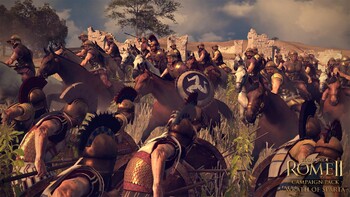 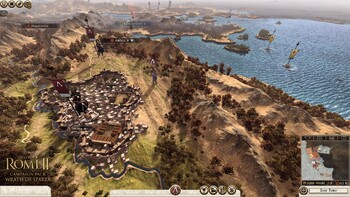 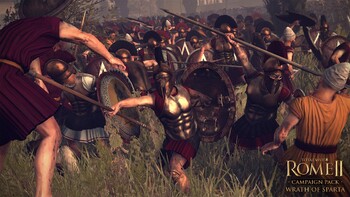 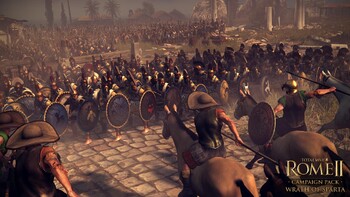 The year is 432 BC, and unrest grows throughout the Greek City-States. At a gathering of the Peloponnesian League, prosperous Athens has earned the enmity of Sparta, Korinthos and the Boiotian League, tipping the delicate political balance past the point of no return.

While the other factions hold a loose alliance against Athenian arrogance, each state has its own agenda. The future of Greece itself is at stake, and the ensuing conflict will result in nothing less than supremacy of the Hellenic world.

Meanwhile, the mighty Persian Empire is watching, waiting, and preparing its armed forces to turn this tide of Hellenic turmoil to its own advantage…

New Campaign Map
The earliest period any Total War game has depicted, Wrath of Sparta’s campaign map is a vivid and detailed representation of the Greek world in 432 BC; featuring 22 provinces across 78 regions, covering the Greek mainland, islands and the Ionian coast. The map brings 12 new Wonders to light, including the Ruins of Troy, the Temple of Zeus and the Royal Tombs of Makedon. Furthermore, as the campaign features a tighter timeframe than the ROME II Grand Campaign, each turn represents one month.

Four Playable Factions
Athens (Athenai), Corinth (Korinthos), Sparta and Boiotia are all playable in Wrath of Sparta, each bringing its own faction traits, unit rosters, challenges and geographical starting point. In addition, famous generals and statesmen of history appear throughout the campaign, such as the Spartan general Lysander and the Athenian dignitary Sokrates.

In homage to their historical strengths, Sparta can field a greater variety of troops than other factions to reflect its mastery in land warfare, while Athens has the roster advantage in naval warfare.

Panhellenic Games and Festivals
The Greeks of the age were keen athletes, and the annual competitions of the Olympic, Pythian, Sithmian and Nemean games are represented. When each is held throughout the yearly calendar, you’ll have a number of choices to make. Do you sponsor an athlete, back a competitor, send an envoy or do nothing? Each choice can bring you favour or misfortune. Likewise, the Greek calendar was packed with religious festivals, which bring their own campaign bonuses and benefits, and bring the flavour of the age to life.

New Tech Trees
Wrath of Sparta features all-new tech trees, reflecting the military, naval and civic developments of the time. The six branches enable the player to advance in the fields of military, naval and support technologies, philosophy, aesthetics and mathematics.

Hellenic Tribalism
With the exception of the Persian Empire, the factions represented in Wrath of Sparta are Culturally Hellenic, so ‘Culture’ has been replaced with ‘Tribalism’. Each faction belongs to one of the Greek tribes, and while the four playable factions won’t suffer from public unrest due to the presence of other Greek tribes, they will suffer major diplomatic penalties with factions that were not ‘true’ Greeks.

The Persian Threat
The Empire of Persia sits at the eastern end of the campaign map and remains largely uninvolved with Greek affairs. However, if one Greek state rises to dominate all others, the Persians will escalate their military involvement over time, in a growing effort to bring that power to heel!

New Army and Naval Unit Rosters
New unit rosters are available to all four playable factions, representing warfare of this period in Greek history. The Greek factions feature a heavy emphasis on hoplites, with supporting elements to react to different combat scenarios and bring tactical variety. There are fewer but more specialised units of mercenaries available to swiftly bolster and bring greater flexibility to armies, and these are more widely available across the provinces.

The backbone of Greek naval assets is composed of tactical variations on the Dieres and Trieres hull types, with a greater focus on ramming and boarding. In addition, troop transports act more as cargo ships than combat vessels, and are no longer able to ram in naval battles, reducing the unfair advantage of troop convoys in naval warfare. This change will be retroactively applied to all ROME II campaigns.

Amongst over 50 new Naval and Land units for Wrath of Sparta, you will also encounter specialist and legendary troops, such as the Immortal Spearmen, Spartan Hoplites and Skiritai.