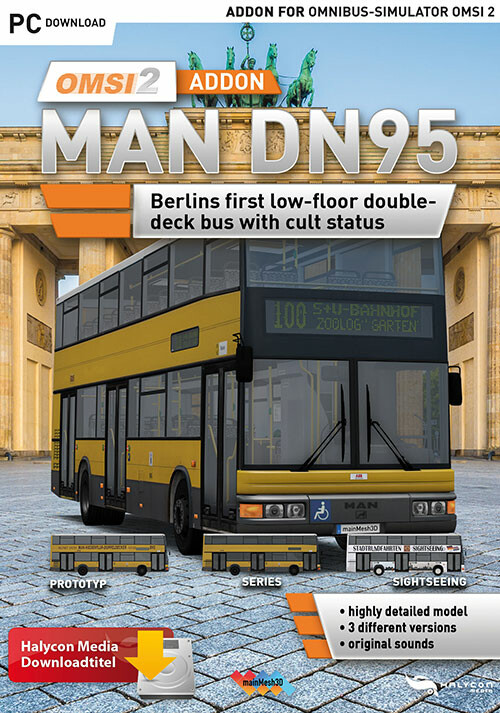 Hardly any other bus has shaped the cityscape as much as the MAN DN95. This double-decker bus, originally called MAN ND202, belongs to Berlin like the Brandenburg Gate, the Reichstag or the TV tower.

It offered 71 passengers seats, another 21 could be transported standing. Now this bolide will be usable in OMSI2 for the first time thanks to the AddOn MAN DN95. The prototype was developed by MAN (chassis) and ABB Henschel (superstructure) until 1994 and series production began in 1995.

There were several innovations, such as the low-floor design, the interior swing door behind the rear axle or the LCD display, which some models had.

Especially for a faster passenger change the bus got a 3rd door behind the 2nd axle. In its design, passengers with restricted mobility were also taken into account. For the first time, the double-decker was designed in a low-floor design.

Thus it bore the proud title: The world's first low-floor double-decker, which made its debut at Berliner Verkehrsbetriebe (Berlin Public Transport) BVG.

BVG received a total of 86 vehicles and used them until 2010. This vehicle series was replaced by its well-known successor - the MAN Lion's City DD, which is used in the AddOn Berlin X10.

As often and as often as the vehicle was used, there was also a big deficit - its height. At 4.12m, the vehicle was only able to cross selected bridges in Berlin that had been checked and approved in advance.

Even the rich sound in the lower deck should not have pleased every passenger. But it is a trademark of the MAN DN 95, because it had a stationary engine.

Numerous variants, the detailed implementation and the original sounds round off this AddOn.